Can you tell us about yourself and your relation to the Wala project?

I am the co-founder and Chief Product Officer for Wala. I work with our tech and design team members to create a unique experience that will engage the next 3.5 billion consumers in the financial system. Specifically, I am responsible for setting the strategic direction of the Wala product and overseeing its creation so that it solves our customers’ problems.

Can you describe the Wala Financial Platform in numbers?

How does the Dala token integrate with the Wala platform?

Wala is the launch partner for the Dala utility token. Wala will reward its users with Dala for

completing activities that benefit Wala, its partners, and most importantly, the consumer. The Dala token is redeemable for value-added services or fiat currency, and is transferable to other Wala members or wallet holders. Once merchants begin accepting Dala, users will be able to transact using their Wala app and Dala tokens.

Wala is a global platform and will integrate with partners in each market that are limited by their geographical border. Dala is the only thing that can match Wala’s global ambitions. Dala will enable Wala to become even more borderless, driving value above and beyond what any financial system can offer.

What is the legal status of cryptocurrencies in sub-Saharan Africa and how will this have an impact the Dala tokens?

For the majority of Sub-Saharan Africa, the regulatory stance ranges from *crickets* to “we have an eye on this but are not yet ruling”. Scams claiming to be cryptocurrencies have appeared in certain markets forcing regulators to issue warnings about investing at-your-own risk. Only Kenya has taken an aggressive stance against crypto by outlawing banks from supporting Bitcoin-based businesses.

Wala integrates closely with banks. Could one say that the Wala wallet will be a front-end to the services these banks offer?

To an extent, absolutely. We offer consumers access to services already available from existing financial institutions. Through these partnerships though, we are introducing services and functionality that these banks didn’t or couldn’t before offer. Additionally, we believe that the experience that Wala has created offers more value to the user than a new skin on the banks’ services.

Will p2p lending be part of the Dala ecosystem?

We have thought about P2P lending a great deal. Enabling it is easy to do but we have not built anything specifically to facilitate P2P lending and it’s not on our short-term product roadmap.

One of the key functions of Dala is remittances. Will the remittance have to cross a fiat gateway in order to be processed?

Thanks to Dala, remittances become much easier. The flow of Fiat -> Dala -> Dala -> Fiat is much more efficient than existing systems. The goal is to eliminate the Fiat conversions on both sides of the transfer so that the customer continues to operate in Dala. They are incentivized to do so as well because avoiding Fiat conversions will minimize their costs. 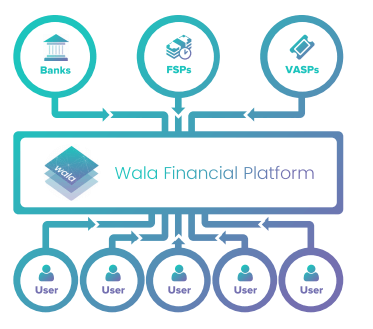 Will the price stability of the Dala coin be managed in order to make remittances safer?

Price stability not only affects remittances but user confidence in general. This is one of the reasons we believe the rewards approach is so critical to adoption. Users will continue to get exposed to the benefits and value of the Dala token and build confidence the cryptocurrency. We will focus on creating a robust economy in each market, ensuring a strong 2-way flow of Fiat <-> Dala. More importantly, we will focus on driving more Dala functionality for users so that the price volatility becomes less impactful.

The breakdown of the Dala distribution is 300M to token backers in the token sale, 400M to the Dala Corporation (100M upfront and 300M over 3 years starting after 12 months), and 300M to Wala (over 3 years starting after 12 months). The 300M sold to backers are immediately transferable and can be used within the Wala app. Also, other organizations that choose to develop products and services upon Dala will be able to immediately.

The Dala Corporation will issue their 400M tokens to partner organizations to incentivize the user adoption of the token. Tokens issued by the Dala Corporation should result in increased utility for the overall Dala token economy.

A portion of the Wala tokens will be used to compensate Wala employees. The bulk of tokens will be set aside for the future to possibly reward customers, provide financial product liquidity, or be used for growth financing.

Several companies are racing ahead to try and bank the unbanked, what gives Wala an edge in this race?

We have spent years researching and understanding our consumers and along the way have built a massive community of over 1 million members who are ready for our services. Those members have helped us build our platform, which exists and is live in Uganda. We know that just giving someone an opportunity won’t change the behaviour of the unbanked. They need a platform that engages them and rewards to incentivize their positive behaviours.

We have a major fiat partner in FINCA. We also have major transactional functionality already available that is critical for getting a consumer to stay banked.

Most importantly, we’re crazy persistent. We have been beaten down before. We have dealt with challenges and naysayers and we’ve only gotten tougher at every turn. Even if not a single person backs us, it won’t stop us from plowing forward and driving the change we want to see happen.

What is the best advice someone has ever given to you?

I had the chance to see Ben Horowitz speak when he was touring to promote his book “The Hard Thing About Hard Things”. He said something that gave me confidence as an entrepreneur who can often feel like an impostor. He said that as the founder or CEO you have built up so much knowledge about your company that you are the leading expert. At some point you have to realize that no advice you receive can come with as much data as you personally have absorbed. That should give you confidence in your ability to trust yourself, no matter the difficulty of your choices.

We thank Samer Saab for the interview.

Revuto Is Announcing Its Public Token Sale Round To Deliver Subscription...