District 0x are building a white-label decentralised customisable trading platform (similar to ebay) on ETH which will enable decentralised transactions between 2 users. This system will have features such as

This system will have features such as eBay / classifieds  / upwork. Users will be able to customise this software to create their own specific district. Coin holders can join a district as “investors” and then get a share of the revenue. Each district will also have an Aragon organisation, for Governance. Aragon is a system for decentralised organisations which will allow organisations created by people across the world to function well.

How much DNT is needed to create a district?

Zero DNT is needed to create a new district on the District 0x platform. Users of the DNT platform will be able to freely create Districts, and no fees will be charged when creating a new district. When a user creates a new district, 1 DNT will be minted and staked to the district indefinitely on behalf of the creator. This assigns the creator of the district the initial voting rights in the district. As more people stake DNT to the district, so too may the original creator of the district purchase DNT on the open market and stake additional DNT to the district in order to increase his or her own share of the total number of outstanding voting shares staked within the district. Similarly, a district stakeholder may at any time leave a district if he chooses to decrease the total number of outstanding voting shares. Participants are free to exit a district at any time, so long as they do not have votes cast in an open vote. The mechanism through which a participant may leave a District is by “un-staking” their district0x Network Tokens. The DNT which was used to stake will be returned to the user after un-staking function is complete.

The mechanism by which District stakeholders participate in a District’s decision-making functions similarly to the way in which a corporate charter and bylaws govern a Corporations’ internal management structure and decision-making processes. The bylaws as set out by the district creator, and amended by the district voters will determine the rules and responsibilities for shareholders, directors, and officers. The creator of each district may define the bylaws, which may, in turn, be amended by shareholders subject to the rules as set out in the District charter. The following are some examples of the types of governance matters which may be amended and or defined via the bylaws of any given District on the District 0x platform.

Who can create new districts on district0X and what will be the DNT cost?

How easily can users build/customise their own districts?

It will be easy for both non-technical users as well as power users to implement varying degrees of customization to districts through the deployment of custom plug-in modules which will be available through an app store interface. Additionally, the front end UI will be completely customizable. Because District 0x is built on the d0xINFRA protocol, an open source framework comprised of Ethereum smart contracts and front-end libraries that govern the deployment of new districts to the network and provide their baseline functionalities, it will also enable the deployment of new features, functionality, auxiliary modules and revenue generating mechanisms to all districts running on top of the District 0x platform.

An example of an auxiliary revenue generating module for a district, is one which provides a mechanism for users to bid on premium placement of their listings, similar to Google AdWords. Winning bids would be sent to the district’s governance pool. The participants in a district ultimately determine how funds in their governance pool are to be allocated via their voting processes. 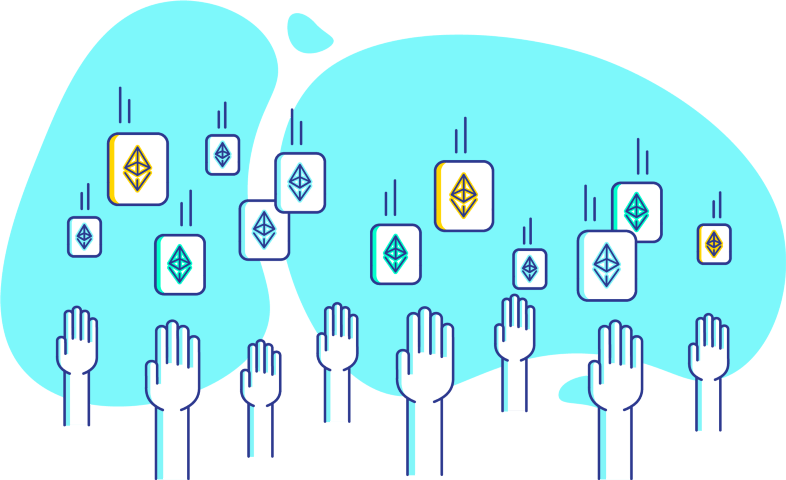 Will it be free for developers to develop add-ons?

The district creation interface will feature an auxiliary module directory, similar to the Apple App Store, to allow for the easy discovery of plugins that extend the functionality and utility of districts. Developers will be able to freely develop add-ons and place them up for download on the app store. If a user wishes to hire a developer to build a module that is not available on the app store, he may seek out a developer through the Ethlance district.

DNT holders can have a relationship with district by staking their DNT to a particular district. What are the benefits of doing so?

As mentioned previously, by staking DNT to a particular district, DNT holders are granted voting rights in each district. Once users have staked DNT to a district, users will be able to engage in a decentralized form of district governance whereby they may perform a variety of action, which can be limited or expanded upon by the district creator, and or the district voters themselves by initiating an amendment to the bylaws.

What is the incentive district creates? Can founders choose who can stake their DNT to a district?

By enabling users to directly participate in the decision making and governance of the platform, and by lowering the district creation cost to near zero, a competitive market of competing districts will develop to attract users and shareholders. Enabling Decentralized governance whereby platform stakeholders share in the rewards generated by the platform and steer its development.

Could DNT token owners become owners of “EthLance” by staking their DNT to this project?

This would depend on how one defines “owners”. Staking DNT to the project would enable them to exert various voting rights limited by the terms defined in the district’s bylaws. The DNT token owners could vote on various mechanisms.

The district0x Project will facilitate the operation and governance of marketplaces and communities operating as decentralized autonomous organizations. This decentralized form of company governance, and network organizations will enable the recreation of many of the internet’s most popular applications and services while eliminating the pitfalls of centralized corporation structures such as rent-seeking and the relinquishment of decisions and personal data to third-parties

Why do districts need an Aragon organisation?

Aragon provides everything necessary to run a company or District on Ethereum. For example, Aragon includes Cap tables, governance, fundraising, payroll, accounting, bylaws, etc. Aragon companies are extremely customizable, and have a clean, easy to use and beautiful interface. Decentralized organizations are arguably more efficient than their centralized counterparties. For that reason, they’ll be able to create better products or services at lower rates.

Aragon allows for user-friendly management of the basic components of an entity such as voting-share distribution, role assignments, fundraising, and accounting. The behavior of an Aragon entity can be customized by changing its bylaws. Aragon entities created for districts will come preconfigured with a suggested set of bylaws and parameters, but district participants can vote to change these as they see fit. The benefit of using Aragon is that it provides a robust, easy to use platform which will enable district’s to organize themselves cohesively.

We thank Joe Urgo for the interview.

Mozzeno A Peer To Peer Lending Platform Based In Belgium.

What Should Millennials Invest In?

Fast Cash On Slave Labour – How To Make Money Quickly...

7 Major Legal Mistakes Made By Startups To Avoid